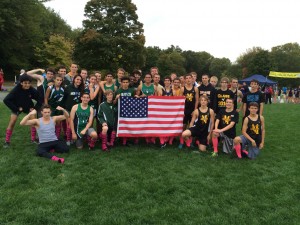 On Friday,  Passaic Valley boys and girls cross country joined the West Milford boys team for a charity race at New York City’s Van Cortlandt Park in the Bronx.  This was the second year PV ran the race–the All Hallows Invitational–in one of the country’s most famous cross-country courses.  We invited West Milford to join us this year and use the race to raise money for breast cancer research.  To signify that we were running for a cause, both teams donned fluorescent pink knee socks.

The PV boys had an excellent race, finishing second overall to Archbishop Molloy of New York, 72-77.  All five PV scorers finished in the top 25 of the race (of 149 total finishers), with senior Chris Solis burning up the course in 14:44 to finish second (one minute faster than he ran the same race last year).
The girls also had a successful meet, though they didn’t get a team score since there were only 4 runners.
Freshman Mary Boudaher led the way in 10th place, followed by junior Nicole Cianci in 14th, freshman Nina Ferrer in 15th and freshman Charlotte Mistretta in 20th.
Hornets Official Sponsor

No Events This Week

Events are added by athletic staff.
View All Events